A project in collaboration with scientists, conservationists, underwater photographers and ocean enthusiasts from around the globe to help bring the endangered whale shark, Rhincodon typus, into the spotlight for International Whale Shark Day, August 30, 2017

International Whale Shark Day is a global celebration of the whale shark, Rhincodon typus, an endangered animal on the International Union for Conservation of Nature’s (IUCN) Red List of Threatened Species. This annual appreciation of whale sharks began in the year 2012 and serves the purpose of helping to raise much needed global awareness, particularly concerning the conservation status of these gentle giants, in the hope that the global event will inspire people to support and aid the protection of the earth’s largest fish. 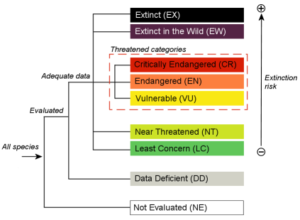 The whale shark, Rhincodon typus, was placed in the “Endangered” category on the IUCN red list of threatened species in 2016 due to a continuous decline in their numbers globally.

First described by A. Smith in 1828 from a specimen harpooned off the coast of Table Bay in South Africa, the whale shark was since placed on the IUCN’s red list of threatened species as “vulnerable” to extinction in the year 2000. More recently, in July 2016, news was quickly spreading that whale sharks had been re-categorised as “endangered”, seemingly placing the species a step closer to extinction. It has never been more critical to further study whale sharks and their habitat, to hopefully preserve and protect our remaining populations. Although whale sharks benefit from international protection, they are under pressure from uncontrolled tourism, targeted fisheries, non-targeted fisheries (by-catch), pollution, coastal development, and shipping activities.

Whale Shark Diaries teamed up with a few scientists, conservationists, photographers and ocean enthusiasts from around the world, to help bring the plight of the whale shark to light today.

The next goal of this initiative is to produce a 2018 whale shark calendar using the photos below, the proceeds of which will be donated to Wild Me, the engineers of the Wildbook for Whale Sharks led by Jason Allen Holmberg, who lead the way in global photo-identification technology of whale sharks and other marine species. You can support this cause by purchasing one of these calendars. We hope to have them available to buy online shortly. Please register your interest in a 2018 whale shark calendar by completing the contact form here. For more information about the work of Wild Me and Wildbook, you can download this PDF here. 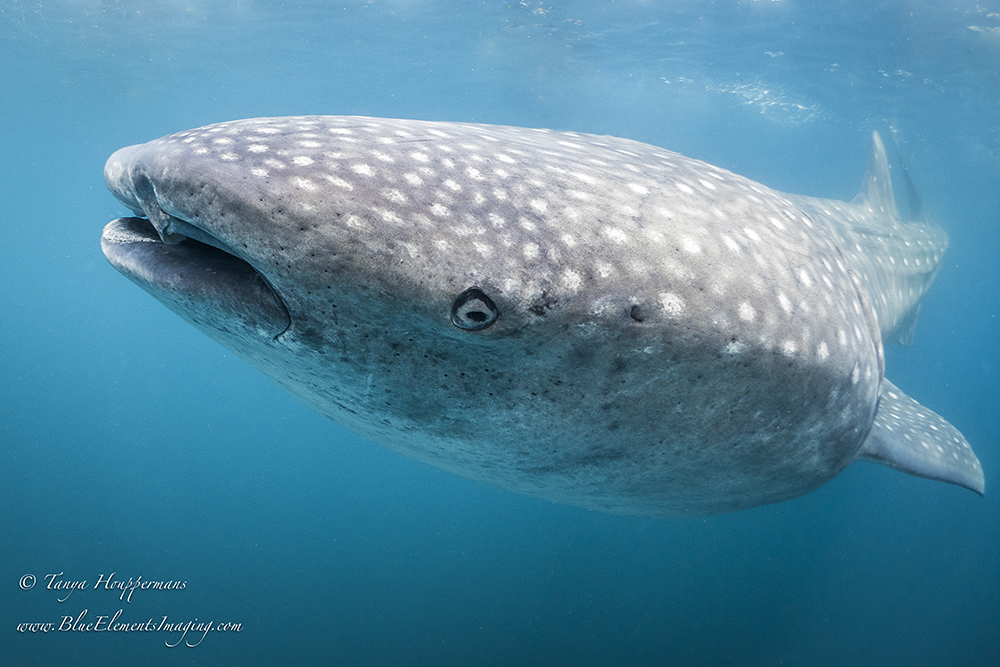 Tanya Houppermans – conservationist and photographer – http://www.blueelementsimaging.com/ :
“My goal with my photography has always been to try to inspire people to care about and want to protect the animals I photograph. This is especially true with whale sharks, which may look strong and invincible, but the truth is that not even the largest fish in the ocean is immune to human threats. Whale sharks are now endangered due to being targeted for their fins, being struck by boats, and becoming entangled in nets and fishing lines. Whale sharks serve a critical role in the ocean ecosystem by feeding on tiny plankton, thereby helping to keep plankton levels in balance. We must continue striving to protect whale sharks, not only for their importance to the health of the ocean, but so that generations of humans to come have the opportunity to see these graceful, docile, beautiful creatures”.
Photograph is from Isla Mujeres, Mexico, home to the largest known aggregation of whale sharks on the planet with in the region of 800 individuals visiting each season. 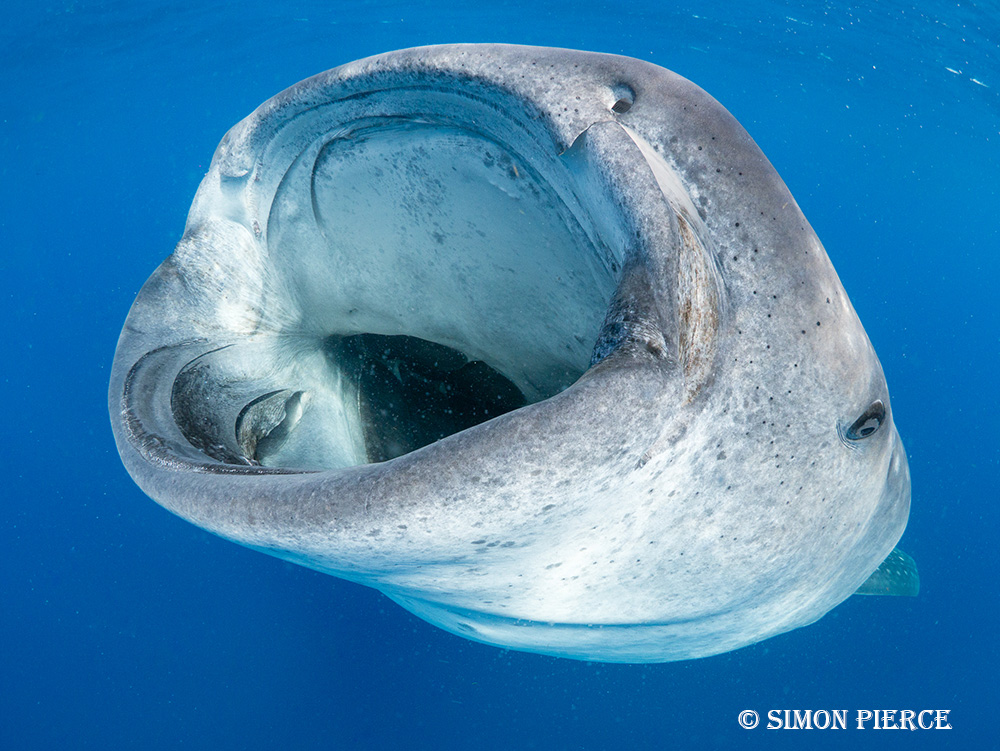 Dr. Simon Pierce – Whale Shark biologist, marine conservation scientist and underwater photographer – https://www.simonjpierce.com/– http://marinemegafaunafoundation.org/:
“I am a Principal Scientist at the Marine Megafauna Foundation (MMF), where I lead the global whale shark research program. Whale shark work at MMF focuses on conservation assessment, habitat protection and sustainable tourism. Our objective is to assist the recovery of this endangered species. Whale sharks are the world’s largest fish, growing bigger than a bus, but are totally safe to swim with. Well-managed whale shark tourism promotes conservation, and it’s an amazing experience.”
Image is a close-up of a whale shark vertically feeding on tuna spawn. 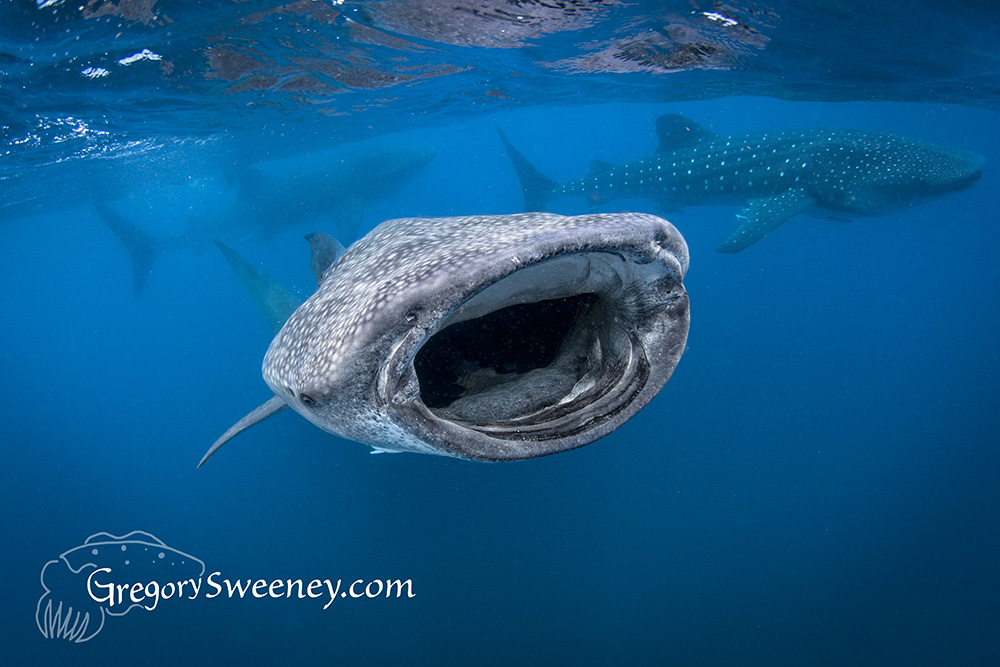 Gregory Sweeney – wildlife biologist and underwater photographer – http://gregorysweeney.com/ :
“As a wildlife biologist, I find great pleasure in my 20 years of researching and photographing whale sharks in different locations around the world. Also I share the adventure of swimming with these gentle giants with curious people; many of whom it is their first large marine animal encounter. More needs to be learned about whale sharks and I hope that my photography and the many people who experience in-water encounters supports future research and conservation efforts”. 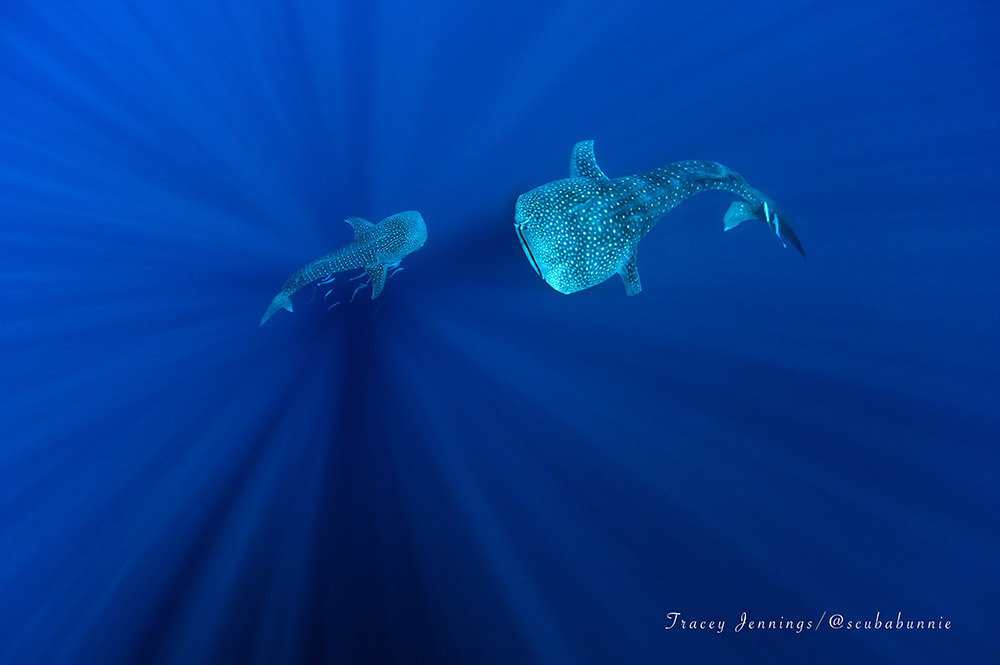 Tracey Jennings – Underwater photographer – http://www.traceydjennings.com/ :
In West Papua, Indonesia the fishermen have a special relationship with whale sharks who they believe to grant them good luck. In return the fishermen protect these magnificent creatures and can often be seen swimming with them. The sharks have learnt to ‘feed’ on the outside of the nets at night – using suction to withdraw the nutrient soup around the fish. To swim and dive with a whale shark is high on the ‘bucket list’ of all divers and people travel across the world to accomplish this dream. 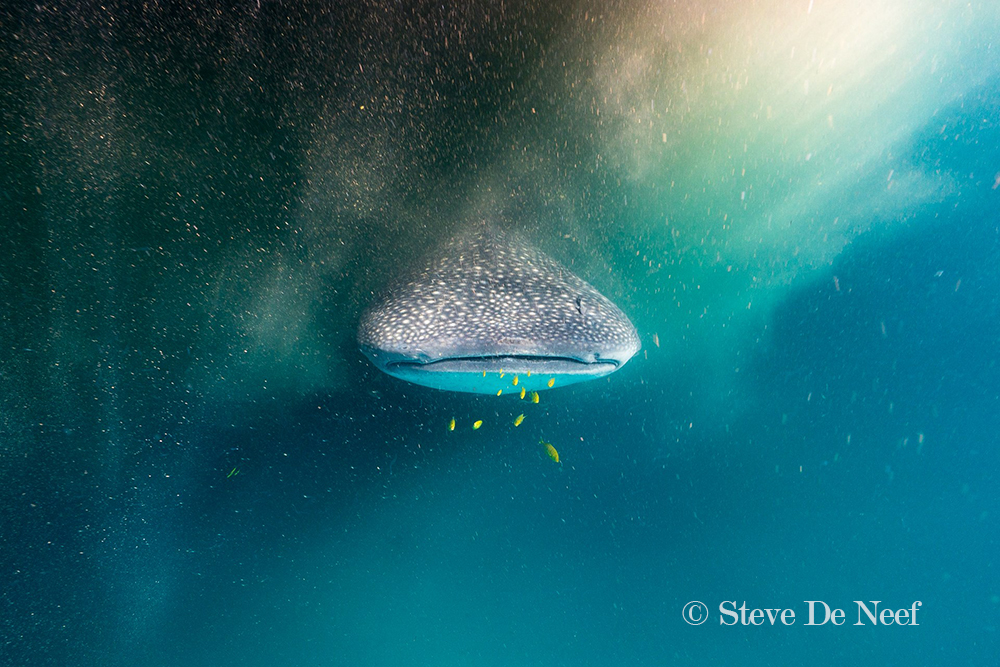 Steve De Neef – underwater photographer – https://www.stevedeneef.com/:
A whale shark emerges out of a cloud of trichodesmium at Mafia Island, Tanzania, where I was fortunate enough to join researchers from the Marine MegaFauna Foundation to this amazing place. Mafia Island is the only known place in the world that seems to have a resident population of whale sharks. Research has found that the sharks here stay around the island year round, most likely due to an abundance of food. This makes Mafia Island a very important study site where long term research on the same individuals can take place giving more insight into growth rates, diet and other mysteries that still remain around whale shark populations. Making sure these places are safe havens for whale sharks is even more important now than ever as globally their population is still declining. An emerging tourism industry is now developing at Mafia Island proving once again that whale sharks can be worth way more alive than dead.

Konrad Madej – marine conservationist:
“Anything which captures my attention for more than a few moments I generally question as to why. And when no one could answer me all the questions I had about these ocean giants, my attention gained more focus. For an animal so big it shocked me to discover so much still remains a mystery about whale sharks. And the more my interest grew, the more time I devoted to helping protect and research these, now endangered, big fish. This photo was captured by my friend and fellow ocean enthusiast Lisa Litwak in 2016, during a research trip off the coast of Honduras, where we had the pleasure to encounter this calm and relaxed whale shark feeding.” 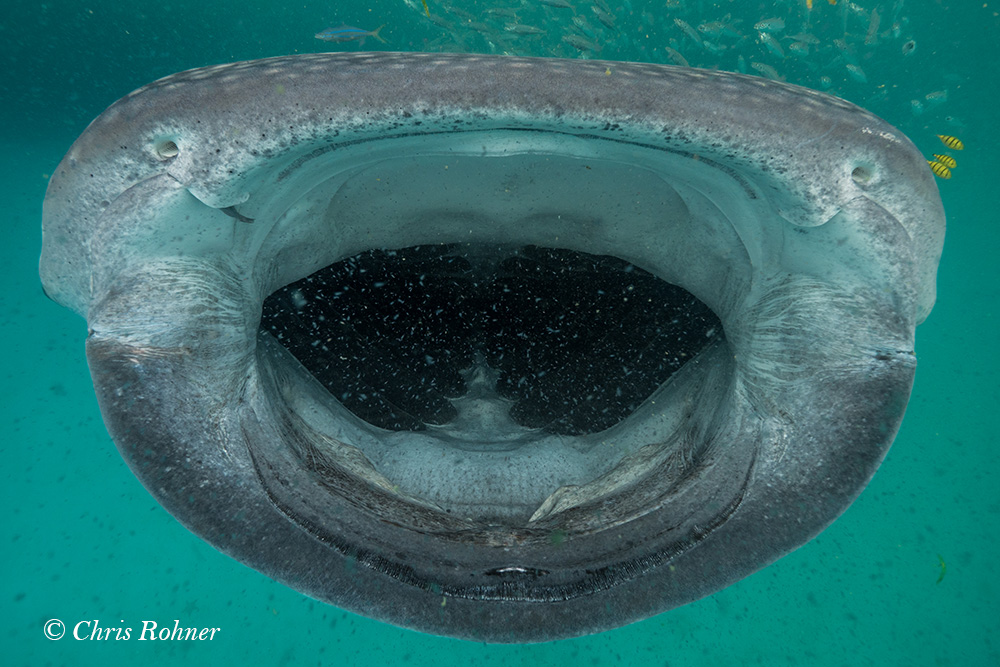 Dr. Chris Rohner – principal scientist at the Marine Megafauna Foundation – https://www.facebook.com/chrisrohnerphotography/ – http://marinemegafaunafoundation.org/:
“One of the aspects of whale shark ecology I have been interested in is how such a large plankton-feeder survives in the warm, tropical waters, where plankton is generally very scarce. Whale sharks turn out to be exceptionally good at finding hotspots of high productivity, such as in this picture taken off Mafia Island, where sergestid shrimps swarm in the shallow water. Whale sharks cannot be choosy and feed on a variety of surface zooplankton, from fish eggs to krill, copepods to small fishes. In addition, they likely get part of their nutrition from night-time emergent zooplankton and from deep-sea prey.” 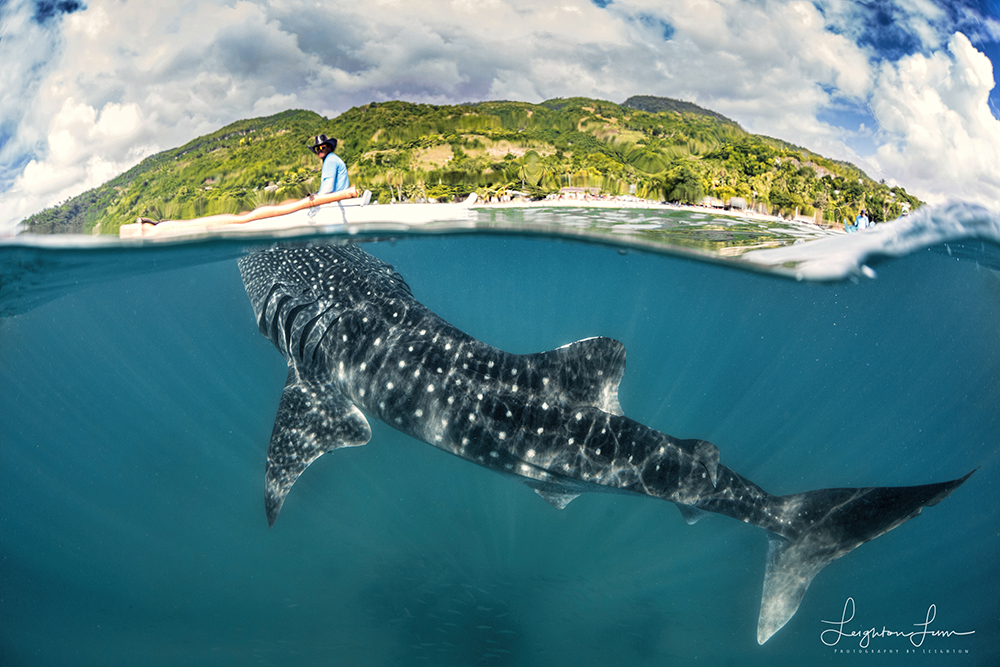 Leighton Lum – wildlife photographer – www.photographybyleighton.com/:
“I am a wildlife photographer from Hawaii. Being born and raised in the islands, the ocean has always been a big part of my life. We are blessed to get a large variety of marine animals that travel to and from the Hawaiian Islands. More recently we have been seeing more and more whale sharks each year. Whale sharks are amongst the gentlest animals in the ocean and by far one of my favorites to photograph. They are filter feeders and are a good indicators of healthy plankton populations and healthy oceans. Whale sharks are an endangered species due to commercial fishing and shipping. With the presence of eco-tourism, people are starting to realize the importance and value of whale sharks to their community. If we can continue to run effective programs that raise awareness of whale sharks and stop harassing them, the future of the species looks bright”.

Ken Kiefer – underwater photographer – https://www.kenkiefer.com/:
“Although I’ve loved sharks for almost all of my life, whale sharks weren’t near the top of my favorite list until recently. My wife really wanted to swim with these huge beautiful animals for years, so a couple of years ago, we made the trek to Isla Mujeres to give it a go. The first time that I swam alongside one of these gentle fish and looked into it’s eye, I was hooked! So amazing. This picture shows my wife alongside a whaleshark that has healed damage from most likely a ship’s propeller. The entire world needs to be educated about how amazing these creatures are and how best to avoid harming them; either purposefully or accidentally.” 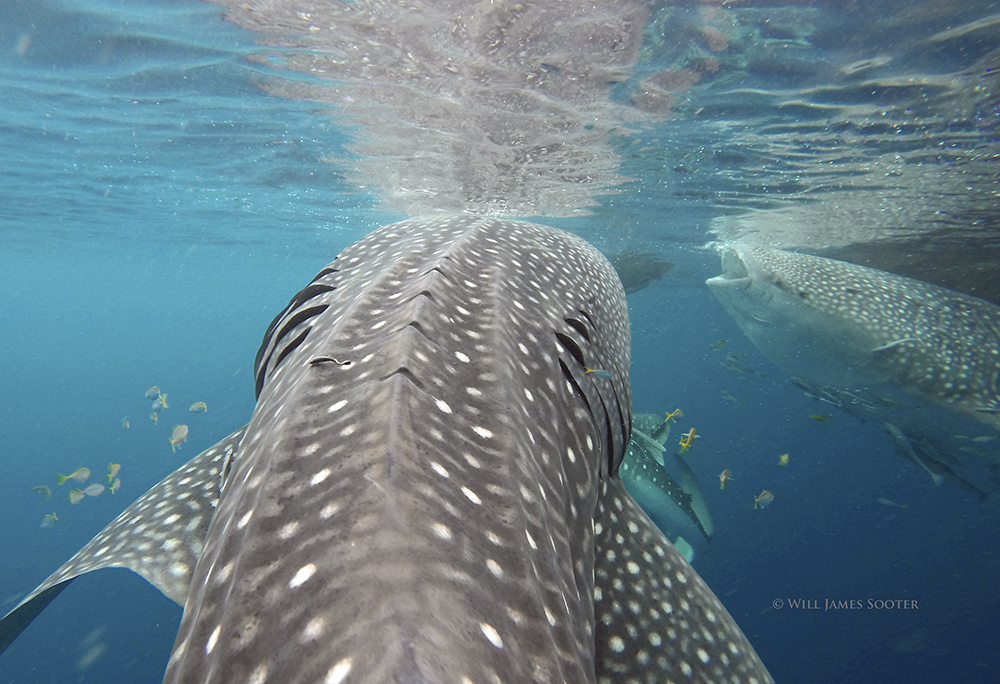 Will James Sooter – field biologist – http://www.sharpeyesonline.com/:
“I sailed into Cenderawasih Bay, West Papua on board a traditional iron wood phinisi and there in the surrounding waters is an aggregation of Whale Sharks that have been attracted to the “bagans” (fishing platforms) and their bounty of anchovies. The sharks gather together below the bagans, feasting on small fish that slip out of holes in the fishing nets. I dove in from a bagan and while snorkeling with these gentle giants captured a few images.” 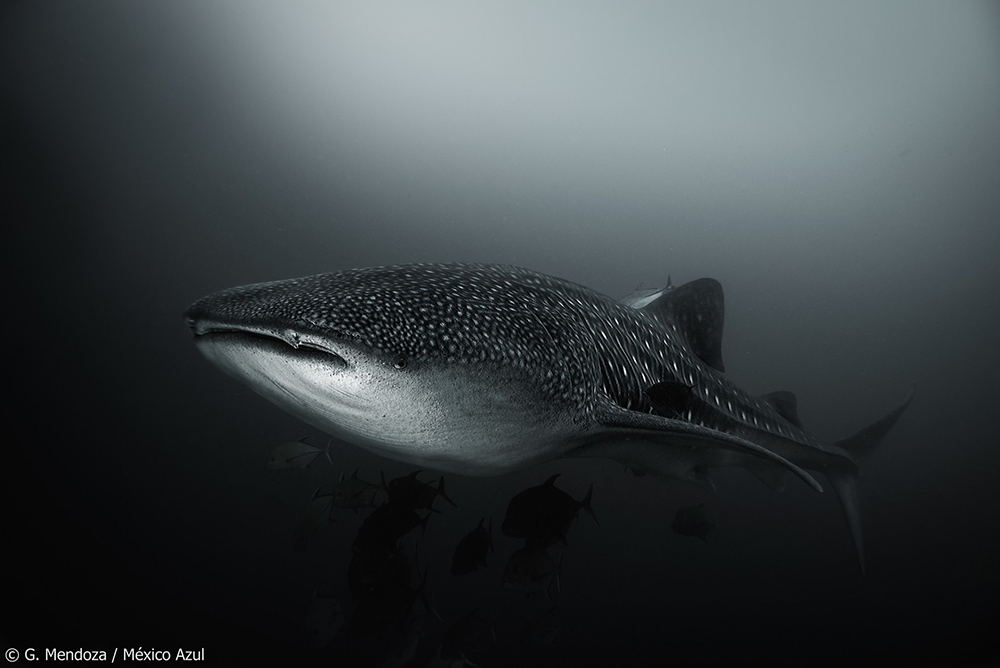 Guillermo Mendoza – marine conservationist and underwater photographer – http://www.mexicoazul.com.mx/:
“Every year, in the summer months, hundreds of whale sharks come to the Mexican Caribbean in search of a rich food source, eggs of little tunny/bonito. However, today the illegal fishing of little tunny and tuna threaten the arrival of these giants of the sea.” 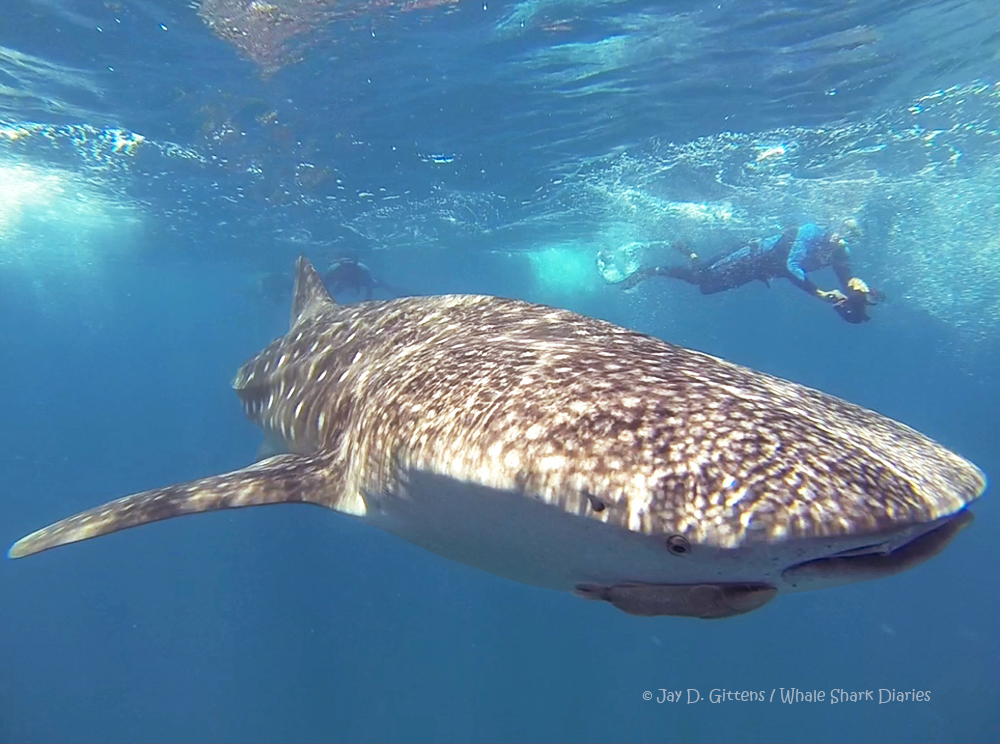 Jay Gittens – marine biologist/conservationist – http://www.whalesharkdiaries.com/:
Since encountering my first whale shark in the year 2008, I have been completely captivated by them. Global whale shark numbers have decreased by over 50% in the last 75 years which is pretty alarming for a species that has roamed the oceans for 60 million years or so. The time has never been more important to increase our understanding and social awareness of these amazing creatures of the sea. With all the great work being done globally – research, management, and education, I am confident that whale sharks can, and will eventually recover from their current endangered status.

As mentioned previously, the next step in this collaborative project is to produce a 2018 whale shark calendar using the content of this photo-blog. We urge you to support us by purchasing one or more. The calendar would make a fantastic seasonal gift for any ocean enthusiast or maybe you can just spoil yourself. Please register your interest in advance for a 2018 whale shark calendar and help the global community of researchers, conservationists and whale shark enthusiasts to protect the earth’s biggest fish.

A huge thanks (in no particular order) to: